Idioms are very common in daily speech. They come from a variety of sources. Some come from the military, some come from politics, others come from literature. But the top source — the one ‘hitting it out of the ballpark’ — is sports!

Sports are popular in American culture. Many American kids play sports, especially as an after-school activity. Many American adults play sports — golf is popular, as is tennis, basketball and soccer. And of course, there’s watching sports on TV, in particular ‘football’.

Every year, over 100 million viewers tune in to the Super Bowl. This is a football game between two of the top performing teams of the year in the National Football League (NFL). One team is the winner of the American Football Conference (AFC); the other team is the winner of the National Football Conference (NFC). These two are ‘pitted against’ each other in the Super Bowl. The Super Bowl is the most watched American TV broadcast of the year.

Given this love of sports, Americans talk about sports a lot. That has led to some of this “sports talk” to carry over to our figurative language in the form of idioms. Here are a few: 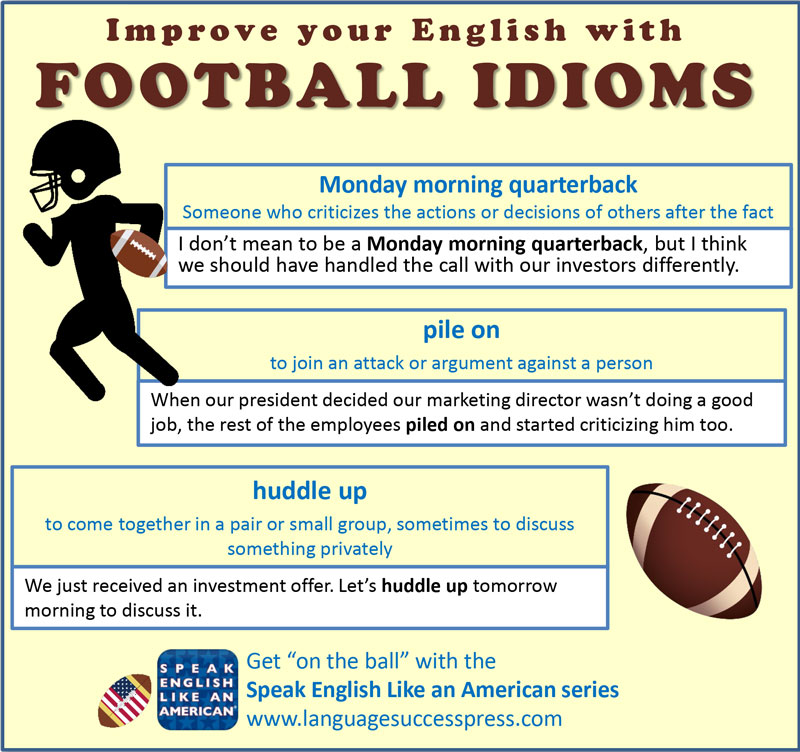 Let's look at where these three football idioms came from:

The idiom comes from the fact that American football games are usually played on Sunday. On the next day — Monday — it's easy to criticize what the quarterback did wrong. The quarterback is the player is the leader of the offense. Their performance can have a significant impact on the fortunes of his team. Before each play, the quarterback tells his team which play the team will run.

So this term is always negative. You may see it phrased as:

I don't mean to be a Monday morning quarterback ...

It's easy to be a Monday morning quarterback but ...

After a tackle, players have "piled on."

In football, this is when one or more players jump on top of a player after a tackle has been made. From the act of physically "piling on," comes the more figurative "piling on" of joining an argument or a verbal attack on a single person.